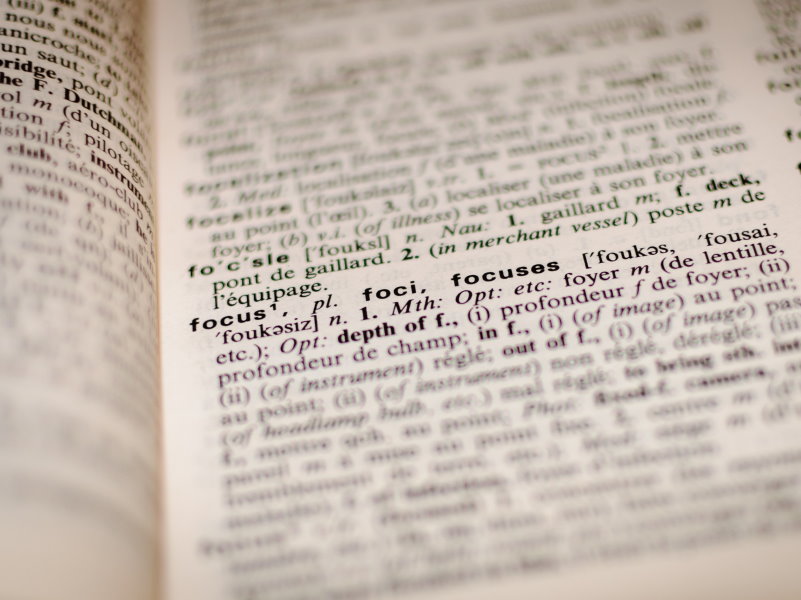 Overview of terms to reference throughout your product search

The angle of view describes the angle with which lenses capture an image with sufficiently low image defects.

Example: If the focal length is equal to the format diagonal, then tan α = 0.5 and therefore the angle is 53°. This is a standard lens for the respective format.

Lenses can be roughly sorted into the following categories:

The evaluation of a lens can only occur when taking into account the format. For example, a normal lens for a certain format can also be used as a long focal length lens for a smaller format. This is particularly relevant in digital photography, because here sensors are used which are smaller than the 35 mm format. Thus, for example, the angle of view of a focal length of 300 mm with 24 x 36 mm negative film corresponds to an angle of view of 480 mm with a sensor of the size 15,2 x 22,7 mm!

The following focal length comparison was shot using a 28 mm focal length setting and from the same position. The first picture was taken with a full format sensor and the second with an APS-C sized sensor. The angle of view of the image shot with the APS-C sensor corresponds to a focal length of apx. 50 mm when converted to full format (although the focal length has physically remained constant).

The aperture (derived from the Latin word aperire meaning “open”) is a device which determines the width of the path for incoming light. The opening is mostly often adjusted with the help of overlapping diaphragm blades which are aligned in a circular shape. The more these blades are moved into one another, the narrower the resulting light path and the less light can enter the system and vice-versa.

The aperture is expressed as a number without dimension derived by the relation between focal length and the width of the lens opening (more exactly: the focal length divided by the diameter of the entrance pupil). The luminosity of the lens corresponds to the smallest f number, so of the biggest relative opening. The f number of mechanical cameras is adjusted on the lens ring, as opposed to electronic cameras where the adjustment is made per control elements on the camera body.

ASL lenses use one or more aspherical lenses.

As a rule conventional lens elements have a constant radius (spherical), i.e. one can imagine that they are cut from a ball (sphere). This simple lens form, however, has disadvantages in terms of image defects. Thanks to innovative production technologies the trend is increasingly going over to the use of aspherical lenses. These lenses have, a surface which deviates from the ball form. Especially the correction of spherical aberration and coma can be strongly improved with these asphericals. Moreover, the distortion is compensated by means of aspherical lenses.

The aspherical is manufactured by compounding a special plastic on the glass surface of the element. Tamron has perfected this cutting-edge technology for serial production and has integrated aspherical elements in a number of lenses, particularly high-power-zooms.

Chromatic aberration is an image defect, reducing the sharpness of an image and originating from the unequal refraction of different light wave lengths. The aberration originates particularly in the edges of an image in the form of color fringes.

LD (Low dispersion) glass is used to minimize this mistake.  Particularly the photosensitive sensors of digital SLR cameras are sensitive for chromatic aberration; hence, its minimization is especially important in Di and Di II lenses.

Unfortunately, the question regarding the depth of field in lenses used together with digital cameras cannot be answered precisely. In general, in contrast to 35 mm film photography, digital photography is influenced by the geometrical nature of the sensor. Nevertheless, in general the depth of field increases with APS-C format sensors in contrast to film, where it remains constant and roughly the same as with full-format sensors. In this case, there is no difference between Di and Di II lenses.

Unfortunately, we cannot make exact depth of field tables available, because we would have to test every lens with every available sensor on the market.

We have tried to show the approximate circumstances with the depth of field tool on our website.

Please note that the calculations of this tool are merely approximate values and do not represent binding specifications. To get extensive control of the depth of field, we recommend using fast lenses, because they offer more creative freedom.

Distortion is a form of aberration in which an image defect ocurrs which does not occur
true-to-scale.

If the enlargement increases towards the edges of an image field, a square is captured in a cushion-shaped form.
The opposite way is called barrel distortion.

The distortion can be compensated with the help of aspherical lens elements.

When parallel light rays enter the lens parallel to the optical axis (= infinity setting of the lens), the outgoing light meets at the focal point. The focal length is the distance between this focus point and the principal plane. The focal length is included in the lens name and is specified in millimeters (mm).

With this aberration different sized pictures originate for different wavelengths of light. This results in color hemlines in the image border.

Glass has the characteristic to break the different wavelengths of light to a different extent. Short wavelengths are more strongly refracted than long wavelengths. This characteristic is called dispersion and leads to undesirable side-effects such as lateral chromatic aberration. In the construction of lenses, emphasis is placed on keeping the dispersion of the overall system very low.

The graphic down below (graphic 01) clearly shows the concept.

Normal optical glass has a relatively high color dispersion index, so that it comes to color hemlines in the image border.

With Tamron LD glass the dispersion is substantially lower, so that color hemlines are minimized in the edges.

With longitudinal chromatic aberration the focal point position on the optical axis varies according to the wavelength. This leads to blurred picture points and poor contrast.

Glass has the characteristic to break the different wavelengths of light to a different extent. Short wavelengths are more strongly refracted than long wavelengths. This characteristic is called dispersion and leads to undesirable side-effects, such as longitudinal chromatic aberration. In the construction of lenses, emphasis is placed on keeping the dispersion of the overall system very low.

The diagrams down below (diagrams 01) underline the correlation: the first diagram shows the longitudinal chromatic aberration of normal glass. Only the middle wavelengths focus on the image plane. The second diagram clearly shows the reduction of this aberration through the application of LD glass.

LD Elements are produced of special glass materials which possess an extremely low color dispersion index (a unit which measures the ability of a glass to separate a beam of light in its spectral colors). LD elements compensate for chromatic aberration, which is particularly a problem with telephoto lenses. Chromatic aberration is a form of optical noise which reduces the sharpness and the brilliance of an image.

The luminosity is defined by the maximum effective diaphragm opening divided by the focal length of a lens.

Lenses with wide apertures are especially required under unfavorable lighting conditions (interiors without flash, animal photography in the dusk etc.). In addition, fast lenses offer a wider scope of creative potential.  Because the size of the diaphragm opening determines the depth of field, conscious and pleasantly blurred backgrounds can be generated with big diaphragm openings, creating dramatic effects by softening surrounding details so the subject seems to “pop” off the background. As a rule stopped-down fast lenses deliver better results than slower lenses at the same aperture setting.

The optical axis is an imaginary line through the centre of curvature of a lens.
(Simply: the center of a lens).

In photography resolution or resolution property refers to the ability of a lens to be able to return certain small detail structures. The resolution is measured in lines per millimetre and is dependent on the position (for physical reasons the resolution is a little worse at the image edges than in the middle of an image). Tamron lenses reach an optimal resolution property over the entire image field due to their construction by means of modern computer design.

The VC (vibration compensation) mechanism is a Tamron development which ensures an effective compensation for camera vibrations. Especially hand-held, low-light and tele photography is susceptible for camera shake and consequent blurred results, due to the required longer shutter speeds. Under these photographic conditions the VC mechanism can unfold to its full efficiency.

The VC mechanism includes a VC lens elements which moves parallel to the image plane merely via electronic control (See illustration 1). The driving coil unit includes a a position detector which assesses the respective position of the element VC and reports to the control unit. The VC element has three magnets which are driven by corresponding driving coils. In the control unit, two gyro sensors are installed, which grasp the horizontal and vertical vibrations and report them to the micro processor. The VC element is free-floating (two degrees of freedom, and parallel to the image plane) and can therefore compensate for vibrations in all directions.

If vibrations occur as shown in illustration 2, a blurred picture originates on the image plane, proportionate to the rotation angle of the vibrations. The gyro sensors grasp the respective vibrations and report the data to the microprocessor. This in turn calculates the rotation angle and passes on the respective control commands to the driving unit which in turn shifts the VC element to counter the direction of the vibration. (The system works at a speed of 4 kHz, meaning that a correction is performed 4000 times a second).

The VC driving unit uses a three-coil system developed by Tamron. The VC element is magnetically held in position, stored on three steel ball bearings. Since the VC compensating lens element is held in place solely by contact with these bearings, smooth, virtually frictionless movement is assured, providing stabilized viewfinder images and excellent tracking performance characteristic of VC lenses. The result is an extremely short response time on grasped vibrations. Moreover, since the VC lens element moves parallel to the image plane via electronic control alone, the mechanical structure is simplified, and the lens is more compact. This serves the compact design concepts which distinguish Tamron lenses.

There are two types of vignetting: natural and artificial. Artificial vignetting is caused by components, such as the iris and fixtures among other things which lie in the optical path. These are to be dimensioned accordingly in the construction of the lens.

A lens in which you can adjust the focal length is called a zoom or a zoom lens. The advantage of a zoom lens is that the frame can be varied without changing your location as the photographer. Zoom lenses have become indispensable. Tamron has achieved an image performance in its zoom lenses which comes close to those of fixed focal length lenses through its ongoing efforts in research and development (e.g., LD – AD – as well as aspherical elements).